Pickleball is a combination of ping-pong, wiffle ball, and badminton. Sounds like a bundle of fun, right? There’s no dispute that pickleball is a fun activity, but it’s also a remarkable cardiovascular workout that can help you burn significant amounts of calories. But just how many calories can it help you burn? Let’s find out.

Maintain great physique and tip-top health is imperative at any age. This, of course, is achieved by sticking to a healthy diet, getting sufficient sleep, and removing stress sources from your life. This is all fine and well, but one major component that we tend to slack off is exercise.

It’s highly recommended by the Centers for Disease Control and Prevention that adults get 150 minutes of regular activity each week. Alternatively, 75 minutes of intense exercise per week will do. But not everyone enjoys the gym or feels like jogging on a regular basis, right?

If you have a favorite sport that you like to do frequently, then great for you. But if you don’t, you may want to give pickleball a shot. Not only will it help get you in shape and burn tons of useless calories, but it’s also extremely fun to play and a great chance to socialize with new people.

Another great thing about pickleball is that it’s not as physically demanding as a full-blown tennis match, it’s basically a ping-pong match with more movements. Pickleball will not only serve your body as a cardio workout, but it will also help enhance your hand-eye coordination over time.

How Many Calories Can You Burn Playing Pickleball?

Now that we have a pretty good idea about what pickleball has to offer, let’s talk calories. Based on the United States of America Pickleball Association (USAPA) standards, an ideal tournament should consist of matches that range between 40 to 60 minutes per each match.

The first match is usually the shortest, and as the tournament continues, matches tend to take a little longer. The USAPA uses an example of 50-minute average match time per match with best 2 of 3 games to 11 points. With 1 game to 15 points, an average of 20 minutes for all matches is ideal. Basically, a full set of pickleball will take about an hour and two sets will require 2 hours.

Now, the number of calories that you can burn can vary from one situation to another. If you’re in the court with a friend and you’re just playing casually, your heart rate is going to remain low and the number of steps that you take won’t be too many. On the other hand, a competitive match is going to have your blood pumping and your sweat pouring, so more calories will be burned.

To get a good approximation of how many calories you can burn in a pickleball game, we should examine the statistics of tennis as it’s the closest cousin to pickleball. Also, there really aren’t an accurate source of statistics for pickleball that we can rely on like tennis.

In a moderate singles tennis match of tennis, if you weigh around the 150-pound mark, you’ll be able to burn about 414 calories, whereas if you weigh around 200 pounds, you can get rid of up to 524 calories at the same pace and time. In a doubles scenario, the 150-pound player can get rid of 288 calories and a 200-pounder can burn around 365 calories.

Let’s try and use the above-mentioned statistics to estimate how much calories can be burned in a game of pickleball. In a best-of-3 set which takes an average of 50 minutes, you’ll probably be able to burn anywhere from 500 to 700 calories, depending on the nature of the gameplay, be it casual or competitive.

To go more in-depth, a casual game of pickleball should have burning around 8.3 calories each minute, whereas a more competitive game will increase that hourly rate significantly. Generally, a person who weighs around 150 pounds can burn about 11 calories per minute while running, so you get a pretty decent picture of how many calories you can burn playing pickleball.

To put a period on this topic, the number of calories that you can burn playing pickleball will be based primarily on the pace of the game. If you’re in good shape and you want to ensure your physique remains healthy, a casual game of pickleball will help you do that. If you’re looking to lose weight, then you need to kick up the intensity and play more competitively.

Here are a couple of YouTube videos that we found helpful in estimating how many calories can be burned during a game of pickleball: The Layout of Pickleball Courts and How Many Calories You Can Burn Playing Tennis. Hopefully, the information provided in this article has been helpful and we hope to see you on the pickleball court soon. 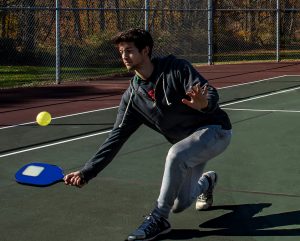 My name’s Simon Read, I’m an IPTPA Level 1 instructor based in Arvada, Colorado. I’m obsessed with pickleball, and it’s my goal to get you obsessed with this amazing game too!